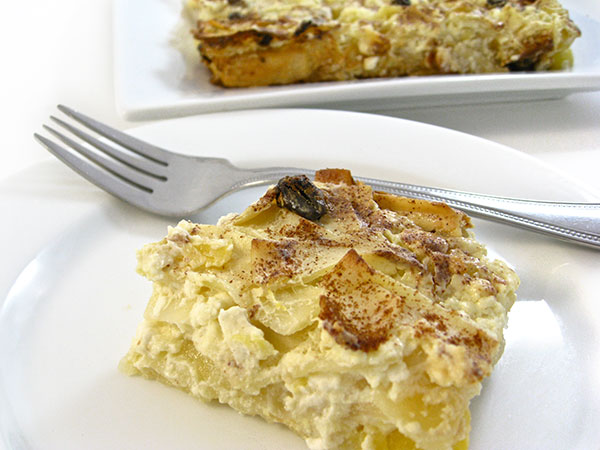 So yummy to serve for Hanukkah or the Jewish New Year. It’s easy to make, dreamy, sweet, vegetarian and just plain delicious!  In Jewish cooking this traditional noodle casserole is called Kugel. Normally it’s served as a side dish for chicken, turkey or beef.  But, it would be terrific as a vegetarian meal served with roasted vegetables or a salad.  Any which way you choose to serve, it’s so, so good.  It’s much skinnier than a normal recipe thanks to using reduced-fat cottage, fat-free sour cream and some egg whites. The skinny for 1 slice, 217 calories and 2 gram of fat.
Prep Time 15 minutes
Bake Time: 1 hour
Total Time 1 hour 15 minutes
Servings 16
Calories 217kcal
Print

Makes 16 slices
Food Facts
The first kugels were made with bread and flour and had a savory not sweet taste. Years ago in Germany, they replaced the bread mixture with noodles or farfel. Later, eggs were incorporated. Today anything goes. From savory to sweet, noodles, potatoes, matzo and dairy, there are so many varieties of kugel.
Healthy Benefits
Cottage cheese and sour cream provide lean sources of calcium.
Shopping Tips
Most large supermarkets sell “no yolk” noodles. These are an egg noodle but only contain egg whites. You’ll find them in the pasta section.
WW Freestyle SmartPoints 8-Blue
WW SmartPoints 8-Green
WW POINTS PLUS 5