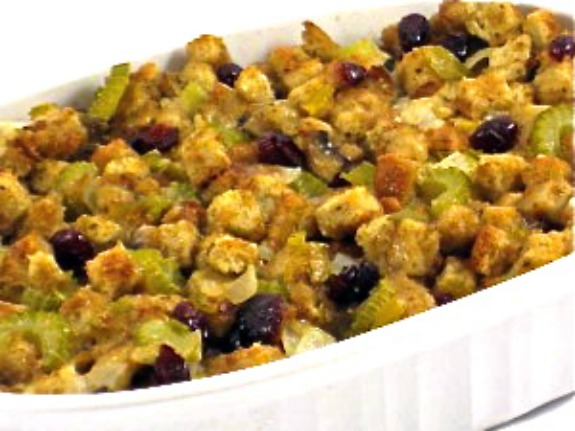 There are hundreds of ways to make stuffing. It can be moist or dry, prepared with French, sourdough, or cornbread, adding ingredients such as sausages, oysters, onions, mushrooms, or chestnuts, to name a few.  The possibilities are endless…I know how hectic the holidays can be so I’ve made it easier by starting with a box of Mrs. Cubbison’s Stuffing. The box is filled with seasoned dried bread cubes. The key to making this recipe skinny is what’s added to it. I’ve added a medley of vegetables sautéed in reduced-fat butter and sprinkled in a few dried cranberries for color.  One skinny serving has 186 calories and 6 grams of fat. This stuffing recipe makes a terrific side dish anytime for chicken, beef, or pork.
Prep Time 15 minutes
Bake Time: 40 minutes
Total Time 55 minutes
Servings 8
Calories 186kcal
Print

Serves 8
Food Facts
Sophie Cubbison’s stuffing has been around since 1948. In the late 19th century, prim Victorians thought “dressing” was a more appropriate word than “stuffing”. Leeks look like a giant scallion.  They are related to both the onion and garlic family but with a much milder flavor. Sage is a traditional seasoning used in many Thanksgiving dishes.
Healthy Benefits
To save on fat, it’s always better to cook stuffing alongside rather than inside the turkey. If you stuff the bird, the fat cooks into the stuffing.
Shopping Tips
Choose leeks that have crisp, brightly colored leaves and have an unblemished white section.
WW Freestyle SmartPoints 6-Blue
WW SmartPoints 6-Green
WW POINTS PLUS 5