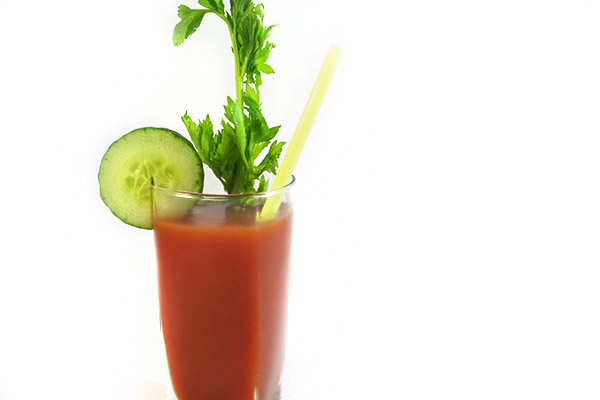 Although the origin of this drink is disputed, some believe Pete Petiot, a bartender at Harry’s New York bar in Paris created it.  In 1933, Petiot introduced it in America, when he joined the St. Regis Hotel.  It was first called “Red Snapper” but once the Tabasco was added it became known as the “Bloody Mary.”  Later in 1960, it became popular to serve this cocktail with celery, thanks to a guest at The Pump Room at the Ambassador East Hotel in Chicago.  These days, the Bloody Mary can be enjoyed in a variety of ways- with beer instead of tomato juice, extra spicy peppers, or even with gin, rum or tequila. I’m using good-for-you tomato juice and dressing it with celery and cucumber. Each cocktail has 210 calories and 0 fat. Whichever way you choose to make it, the grown-ups will surely enjoy it!
Prep Time 5 minutes
Cook Time 0 minutes
Total Time 5 minutes
Servings 6
Calories 210kcal
Print

Makes 6 cocktails
Food Facts
Some feel that the Bloody Mary helps cure hangovers and so that’s why it’s popular to serve in the morning.  Make it without liquor and it’s called a Virgin Mary or also called Contrary Mary. Tabasco Sauce has been around since the 1800’s.  It’s a fiery sauce made from Tabasco peppers, vinegar, and salt.  The Tabasco pepper is a very hot, small, red Chile that originated in the Mexican state of Tabasco.
Healthy Benefits
The Bloody Mary actually has some good nutritional value thanks to the tomato juice.  It contains lycopene, which is an antioxidant found in tomatoes.  Lycopene has been shown to help reduced the risk of some cancers.