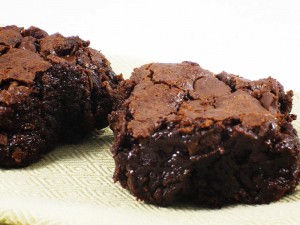 These magnificent brownies are so rich, moist, chocolaty, and fudgy.  It’s hard to believe they are reduced in fat and calories.  One bite and ! know you’ll be hooked. Most brownies are made with lots of butter or oil. They can have as much as 580 calories and 23 grams of fat for just one brownie! My skinny brownies are only 188 calories and 5 grams of fat and 5 Weight Watchers POINT PLUS. Just by using a small amount of canola oil moisturized by applesauce these brownies are dense, fudgy, and gooey beyond all expectations. The key is to use the best quality cocoa.* The second trick is to under bake them. I also use dark brown sugar as opposed to golden brown. This enhances their flavor. I hope you try these soon. They are pure chocolate bliss!

2. In an electric mixer or using a hand mixer in a large bowl, combine the egg whites, egg, applesauce, canola oil and vanilla.

3. Add both sugars and blend well. Stir in the flour, cocoa, baking powder and salt and ¼ cup chocolate chips and mix just until smooth. Do not over mix.

4. Pour the batter into prepared pan and spread evenly. Sprinkle remaining ¼ cup of chips evenly over the top of the brownies.

5. Bake for 20-25 minutes or until set. A toothpick inserted into the outside edge should come out clean, but the middle should still be somewhat soft. The key to this brownie is in the bake time. It should be slightly under baked in the middle to give it the fudgy consistency. The inside must remain soft. Over baking will change the brownie by causing it to be dry and cakelike.

6. Remove from the oven and let cool on the counter top.

The first known recipe for brownies was published in the Sears and Roebuck Catalogue in 1897. Folklore has its origin coming from a carless cook who forgot to add the baking powder to the cake batter recipe. The origin is thought to be from America.

Cocoa Powder is made from ground, powdered cocoa beans with the bulk of the cocoa butter removed. Cocoa Powder comes either natural or Dutch -processed. Dutch- processed cocoa taste much richer and works best for baking.

Most grocery stores carry the usual Hershey’s or Nestles unsweetened cocoa*. I do not recommend either of those brands. The key in any recipe that calls for unsweetened cocoa is to choose a rich cocoa such as Droste, Scharffen Berger, Waltkins, or Callebaut. Although many grocery stores carry these, you can certainly find them at specialty stores like William Sonoma, Gelsons, and World Market.

If you store cocoa powder in an airtight container in a cool, dark, place, it will last up to 2 years. Place away from herbs and spices as it can easily absorb other flavors.

I like to cut all 16 brownies and place each one in a decorative muffin cup. These cups can be found in your local grocery store or crafts store such as Michaels. They come in several themed prints.