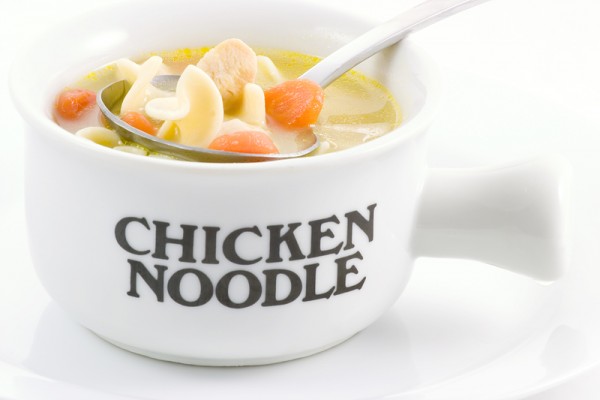 Serves 6 (each serving, 2 cups)
Food Facts
Dating back to the 12th century, trusted healers started to prescribe “the broth of fowl” for their ill patients.  During that time an Egyptian Jewish physician named Rabbi Maimonides started writing about the healing benefits of the soup. In 1934 Campbell’s introduced condensed chicken noodle soup.  It’s one of their most popular flavors.  It’s also among the top 10 food items sold in major grocery stores.
Storage Tip
This soup freezes great. Divide and freeze in pint or quart size containers.
Shopping Tips
I’ve tried most of the chicken broths available and my favorite is Swanson’s reduced-sodium chicken broth. It comes in a 10, 32, and 48 ounce container. If you are on a strict low-sodium diet, choose a chicken broth that has a lot less sodium than this one. Most supermarkets carry “no yolk” noodles.  There are several brands to choose from. They’re made with egg whites instead of the whole egg.  They also have 3 grams of fiber per serving. In fact, whenever a recipe calls for egg noodles, I usually use these.  If you really want to make this soup healthier, you can substitute whole wheat noodles such as Ronzoni Healthy Harvest Whole Wheat Blend Pasta. These contain twice the fiber, 6 grams per serving. They’re also yolk free.
WW Freestyle SmartPoints 1-Blue
WW SmartPoints 4-Green
WW POINTS PLUS 4