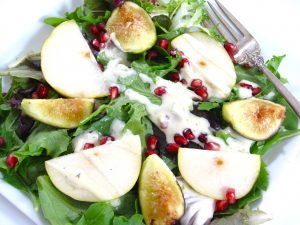 This delightful composed salad takes advantage of some of the fabulous fall flavors such as, sweet tasting figs, pears and succulent pomegranate seeds.  I drizzled a homemade Parmesan dressing over the top to complete this seasonal salad.  The dressing works great because it creates a popular paring of fruit and cheese. The skinny for each serving, 121 calories, 3 grams of fat and 5 Weight Watchers POINTS PLUS.  You’ll love how quickly this first course salad comes together.

1. In a small bowl whisk together all dressing ingredients.  Cover and refrigerate until ready to use.

2. Divide lettuce among salad plates.  Place one sliced fig on top of the lettuce on each plate.  Divide and place 4 slices of pear around each salad.  Divide and sprinkle each salad with pomegranate seeds.

3. Drizzle each salad with 1 tablespoon of dressing to start.  Add more, if desired.

Food Facts
Figs are probably one of the first fruits that man ate.  They’re believed to be the favorite fruit of Cleopatra.  Figs first originated in northern Asia Minor.

For centuries, pomegranates have been regarded as a treasure among fruits.  In ancient times, the Babylonians would chew the seeds before battle, believing it would make them invincible. A Ancient Egyptians were buried with pomegranates.  In modern times, the pomegranate is a popular addition to Middle Eastern, Indian and Iranian cuisines. In the United States, this “jewel of winter” as it’s sometimes referred to have become widely marketed as a powerful health juice in the last couple of years. Only the seeds of this heart-healthy fruit are edible.

Healthy Benefits
Pomegranates are often called a super fruit because they are loaded with antioxidants, in fact, three times higher than green tea. An increasing numbers of studies are confirming what it appears many cultures have known for some time: pomegranates are indeed a wonder fruit.

Parmesan is low in lactose, which makes it a good choice for people who are lactose intolerant.

Substitution Tip
If you don’t want to make the Parmesan dressing you can use a store bought bottle of reduced-fat Italian dressing such as Cardini’s Caesar Vinaigrette.  Cardini’s is one of the better tasting bottled light dressings and would taste good with this salad.  Just add a little grated Parmesan cheese to the bottled dressing before drizzling over the salad.

Can’t find figs?  You can use a sliced apple instead.