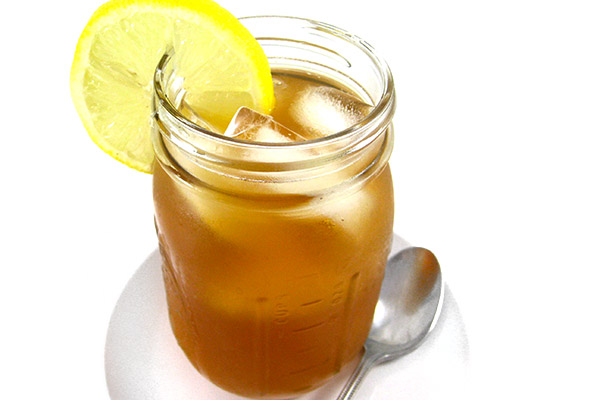 The fabulous Arnold Palmer or Arnie Palmer, is a delightful drink of half iced tea and half lemonade.  It’s named for the legendary golfer and is said to be his favorite beverage.  The iced tea can be sweetened or unsweetened.  So popular all across America but depending on where you live it goes by different names.  In some parts of the South and Baltimore the Arnold Palmer is know as half and half.  In Southern Ohio it’s known as “Blend.”  Whatever you call it, you’re sure to enjoy this refreshing drink year round. I’m making the lemonade from scratch.  If you want to cut the sugar, see the substitution tip below. Each sweetened serving has 81 calories, 0 fat and 2 Weight Watchers POINTS PLUS.

1. Brew tea for at least 5 minutes. Let cool or add a little ice to cool down.

2. In a large pitcher, combine lemon juice and sugar.  Add the cooled tea.

5. Garnish with a lemon wedge.

6. Store pitcher of Arnold Palmer in the refrigerator.

Food Facts
The Arnold Palmer has four alcoholic variations. The “Tom Arnold” is made with the original iced-tea/lemonade combo with vodka added.  The “John Daly” contains 1¼ oz citrus vodka, ¼ oz triple sec and topped with the ice-tea/lemonade drink.  A “dirty Palmer” has ⅔ Arnold Palmer and ⅓ Rum.  The last is called, “Hard Palmer” which has equal parts of Palmer and “Mike’s Hard,” a bottled mixture of lemonade flavor and malt liquid.

Tea is native to China.  Tea plant cultivation began about 4,000 years ago.  Americans invented the tea bag. They also started the practice of drinking iced tea at the St Louis World’s Fair in 1904.

Healthy Benefits
Scientific studies have shown that both black and green teas increase the body’s antioxidant activity by up to 45%.  They’re also known to have antibacterial powers against cavities and gum disease.

Lemons are an excellent source of vitamin C.  They’re also a good source of magnesium and potassium.

Quick Tip
If you don’t want to make this recipe from scratch, you can buy regular unsweetened iced tea and lemonade.

Substitution Tips
If you want to cut the sugar down a bit use ¼ cup sugar and 5 packets of Splenda or Equal.

Change the flavor of this drink by adding a splash of pomegranate juice.  It’s my own invention and I call it an “Arnold Pom.”

If you add a splash of grenadine to the Arnold Palmer it’s called a “Bryan Palmer.