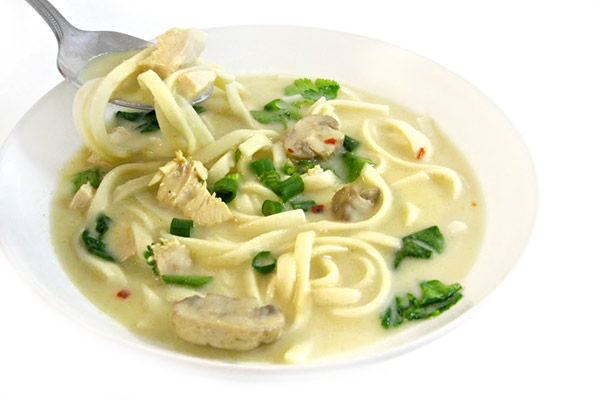 I just adore chicken soup! This aromatic chicken soup has distinctive Thai flavors. Coconut milk is used to create a mild, rich, and creamy taste.  Adding a little lime juice, lemon grass, cilantro, ginger, and red pepper flakes make this divine soup a perfect blend of spicy, sweet and sour.  I’ve made it skinny by using such things as reduced-fat coconut milk, reduced-sodium chicken broth and adding nutritious spinach.  It now contains 362 calories and 13 grams of fat per serving compared to a regular recipe at 798 calories and 42 grams of fat.  Get ready to love this soup!

¼ -½ teaspoon red pepper flakes, depending on your desired spiciness

1 stalk lemon grass, white part only, cracked open with the flat side of a knife

2 teaspoons ginger (from a jar) or fresh grated ginger root

1. In a large saucepan heat the olive oil over medium-high heat.  Add garlic and red pepper flakes.   Saute for 3 minutes until fragrant.

2. Add the chicken broth, coconut milk, chicken, mushrooms, noodles, cilantro, lemon grass, curry powder, ginger, sugar, and pepper scraping the bottom and sides for any brown bits.  Bring soup to a boil, then turn down to a simmer.

3. Stir in the spinach and simmer until chicken is cooked, about 5 minutes.

4. Remove soup from heat and stir in lime juice.  Remove the piece of lemon grass and toss it.

5. Ladle into serving bowls and garnish each with a little green onions.

Coconut milk is made from the flesh of a coconut.  It’s used as a cooking base in many recipes, particularly in Thai cooking and other Southeast Asian countries along with West Africa.

Lemon grass is one of the most important herbs used in Thai and Vietnamese cooking.  It has long, thin, gray-green leaves and a woody scallion-like base.

Healthy Benefits
Although coconut milk contains saturated fat, it’s much healthier than most saturated fat products.  The fat is easily metabolized by the body.  It is anti-carcinogenic, anti-microbial, and ant-viral.  Look for light coconut milk which had much less calories and fat.

Spinach provides a rich source of iron plus vitamins A and C.

Lemon grass can be found in the produce section of most supermarkets and Asian markets.  It’s also available dried.

Ginger in a jar can be found in the produce section next to garlic in a jar.