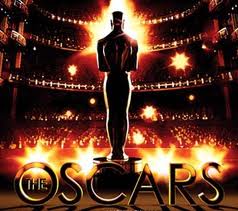 This Sunday, February 26th is the 84th Annual Academy Awards.  The first Academy Awards ceremony was held in 1929 at the Hotel Roosevelt in Hollywood. It was a private brunch with an audience of about 270 people.  This year it’s at the Kodak Theatre in Hollywood and millions of people will watch from all over the world. I think most of us feel the best part of the evening is seeing what everyone is wearing, right? What you serve while sitting in front of the TV is the other delicious part.
I decided this year, at the last minute, to have a few girlfriends over to watch the pre-show and the awards show. Whether you’re hosting a party or just watching with your family, you’re not going to want to spend the evening in the kitchen! Who knows what you might miss…That’s why I love this menu. It’s not only skinny and fun to eat but everything can be made the day before, if desired.  I don’t know about you, but I don’t want to be in the kitchen during the show…

I looking forward to the evening and hope you have fun too! See my skinny menu, below.

Here’s the nominees in the most popular categories: