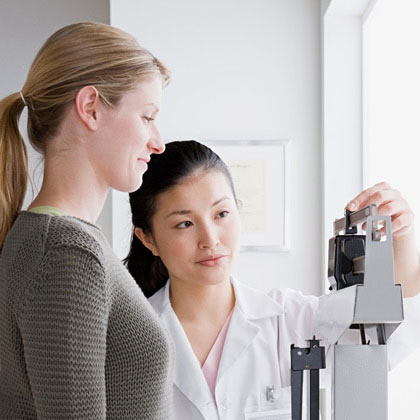 Have you ever stepped onto the scale and wondered….”How much do clothes weigh?”

Whenever I step on the scale at the doctor’s office, I always wonder, “…How much do clothes weigh?”That’s because I always weigh more on the medical scales than I do on my own bathroom scale (when I have little in terms of clothing on) so I’m looking for anything to help me feel a bit better about what the scale is going to say.

To feel better about the number, I instantly blame the very heavy, bulky clothes I’m wearing, despite the fact that I am usually in running capris and a lightweight top.

Now, a study from the USDA’s Grand Forks Human Nutrition Research Center in Grand Forks, North Dakota, published the results of their study to answer this exact question in the International Journal of Obesity.

The researchers studied 50 adults for a year, weighing them with and without clothes (and no shoes) once during each season. The results showed that men’s clothes weigh more than women’s and differences in clothing weight throughout the year are not significant enough to have different standards for winter versus summer.

The authors concluded that women can subtract 1.75 pounds and men can subtract 2.5 pounds for their clothing (don’t wear shoes). So, next time you’re getting weighed in a clinical setting, be sure to mention to whomever weighed you to subtract 1.75 pounds on your record! Show off a bit and tell them you read about it and have the published medical reference for the study that determined the average weights of clothing for men and women.

Remember, those who lose the most weight and maintain a healthier weight weigh themselves at least once a week.