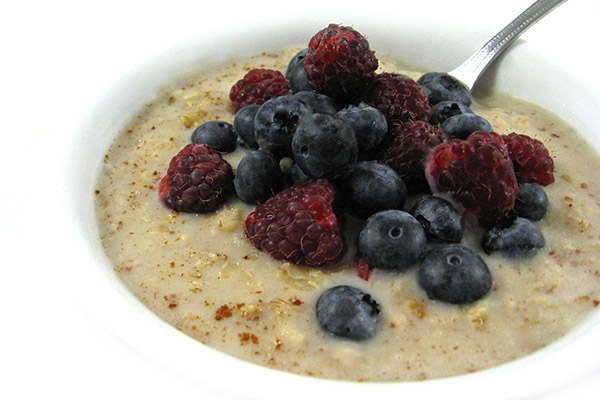 There’s nothing quite like a warm bowl of homemade oatmeal in the morning. It fills you up for hours. I’ve added a flavorful step of toasting the oats first before cooking in boiling water.  In addition, I’m adding creamy vanilla soy milk, vanilla, cinnamon and fiber rich berries to create a wonderful flavor. Made this way, 1 serving has 8 grams of fiber! Try these additions or get creative with your own. What a great way to be start off your day healthy!
Prep Time 8 minutes
Cook Time 10 minutes
Total Time 18 minutes
Servings 1
Calories 267kcal
Print

Makes 1 serving
Food Facts
Quaker Oats registered as the first trademark for a breakfast cereal.  The trademark was registered with the U.S. Patent Office as “a figure of a man in ‘Quaker garb.'” Both former owners, Henry Seymour and William Heston, claimed to have selected the Quaker name as a symbol of good quality and honest value. Soy milk is a drink made from soybeans.  It’s produced by soaking dry soybeans and grinding them with water.
Healthy Benefits
There is 25 years of clinical proof to show the soluble fiber in rolled oats can help lower cholesterol, which has obvious benefits for the heart. Berries are loaded with fiber and they top the charts in antioxidant power, protecting your body against inflammation and free radicals, molecules that can damage cells and organs. Research has linked cinnamon with helping to reduced blood sugar, cholesterol, and triglyceride levels in people with type-2 diabetes.
Weight Watchers POINTS PLUS 5, if using Splenda or Stevia instead of brown sugar
Skinny Facts: for 1 serving using Splenda or Stevia instead of brown sugar
215 calories, 3.5g fat, 7g protein, 42g carbs, 8g fiber, 29mg sodium, 7g sugar   Weight Watchers (old points) 5 using brown sugar
Weight Watchers POINTS PLUS 7 using brown sugar