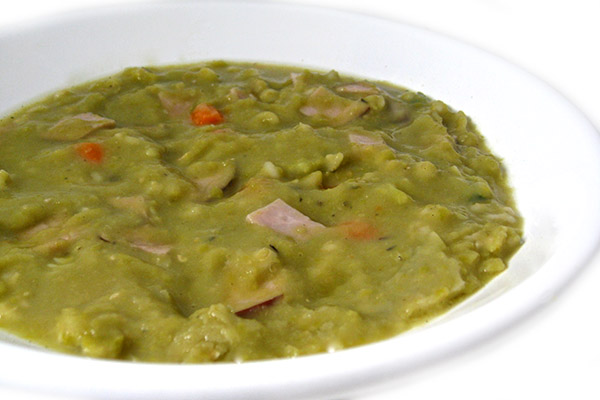 This fabulous, fiber rich soup is my very favorite split pea soup!  It’s chock full of healthful ingredients such as green peas, pearl barley, carrots and onions.  To keep it skinny, I’m using lean chunks of ham but adding them after the soup is cooked. This popular soup is usually cooked with a fatty ham hock in it. Leave the ham out all together and this water based soup makes a wonderful vegetarian soup! Each very filling 1 cup serving has 328 calories, 2 grams of fat and 9 grams of fiber.
Prep Time 15 minutes
Cook Time 1 hour 30 minutes
Total Time 1 hour 45 minutes
Servings 8
Calories 328kcal
Print

Serves 8 (1 cup serving each)
Food Facts
Split pea soup has been around for thousands of years.  There are records of this soup being made and sold by street vendors in Greek and Roman societies as early as 500 to 400 B.C.  Many cultures have relied on this soup in times when meat protein sources were hard to come by, primarily in the winter. Barley is a versatile cereal grain with a rich nutty flavor and an appealing chewy, pasta-like consistency. Its appearance resembles wheat berries, although it is slightly lighter in color.
Healthy Benefits
Split peas are full of fiber, a good amount of protein, two B-vitamins and several important minerals. Barley contains a lot of fiber and selenium, and a good source of phosphorus, copper and manganese.
Vegetarian Tips
If you want to make this soup vegetarian just leave out the ham. The water based broth and barley still makes it a delicious and hearty vegetarian soup.
Shopping Tips
I used delicious, lean ham that I bought at Trader Joe’s.  It’s uncured and contains ‘no nitrates’!  Sometimes I use their lean pastrami instead of the ham. it also contains no nitrates.
Storage Tips
This soup will keep in the fridge for several days and freezers great.  It will thicken with time so add a little water before reheating.
WW Freestyle SmartPoints 2-Blue
WW SmartPoints 8-Green
WW POINTS PLUS 8