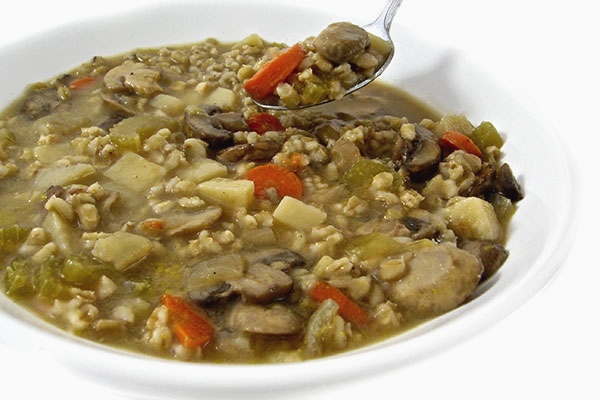 Did you ever wonder how to make this popular, robust and filling soup?  Happily, it’s super easy to prepare.  It’s loaded with fresh mushrooms, fiber rich barley and vegetables.  In fact, 1 cup has 5 grams of fiber! Just by swapping reduced-fat butter for regular, I’ve cut the fat from 6.2 grams down to a mere 2.5.  Each 1 cup serving has 142 calories and 3 grams of fat.  Normally this soup is made with chicken broth but, you can make it vegetarian by using vegetable broth instead.  It’s best made the day before you want to serve it. The flavors become enhanced overnight. So make a pot of this pipping hot, hearty and nourishing soup. You’ll be so happy you did!
Prep Time 15 minutes
Cook Time 55 minutes
Total Time 1 hour 10 minutes
Servings 10
Calories 142kcal
Print

Makes 10 cups (each serving 1 cup)
Food Facts
Mushroom barley soup has roots in the Ashkenazi Jewish communities of Eastern Europe. Mushrooms were popular in these cold-weather countries because they could be harvested, dried and stored for later use. Barley is arguably the world’s first and most ancient cultivated grain. It dates back to the Stone Age. A recipe for barley wine was found engraved on a Babylonian Brick.
Healthy Benefits
Mushrooms are very nutritious. They contain fiber, iron, niacin, folate, vitamin C and complex carbohydrates. Barley is extremely rich in dietary fiber and low in fat. One serving offers 11% of the RDA of iron and contains a fair amount of folate and niacin.
Shopping Tips
I found 10 ounce bags of washed and sliced mushrooms at Trader Joe’s. You can use one bag of white button and one bag of crimini. These will save a tremendous amount of prep time! If you’re looking for this soup to taste just the deli’s, use Swanson’s reduced-sodium chicken broth, however, if you’re on a strict low-sodium diet, look for a chicken broth with less sodium then this one has.
Serving Tip
This soup is perfect to start off a meal but can be served as the main course too. Add some cooked chicken to make it even heartier.
Weight Watchers (old points) 2
Weight Watchers POINTS PLUS 4