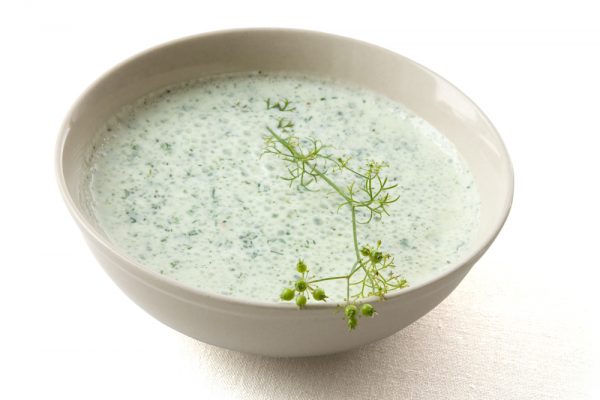 This versatile and flavorful cilantro-ranch has a hint of fresh lime juice and honey. It makes a perfect dressing or sauce for Latin-inspired dishes like fish and chicken tacos or drizzled over roasted vegetables. You’ll love it on a simple salad and especially on my recipe for, Mexican Style Cobb Salad, So Deliciously Satisfying and Low in Calories. A 2 tablespoons serving has just 33 calories, 1 gram of fat and 1 Blue WW Freestyle SmartPoints, and 1 Green. It’s zesty and tangy flavors are so refreshing.

1 cup fresh cilantro (remove most of the stems)

1 Prepare the recipe for The BEST Skinny Ranch Dressing. This recipe uses ¾ cup ranch dressing. Refrigerate the remaining ranch for at least a week or two.

3. Pour dressing into an airtight container and refrigerate for at least 2 hours to thicken.

4. Cilantro Ranch Dressing will keep for up to 1 week refrigerated.

Food Facts
Cilantro has a peppery aroma and distinctive flavor, sharp, and lemony with a hint of anise.
Cilantro is the Spanish word for “herb,” but is known elsewhere in Europe and beyond as coriander. Coriander is the preferred name for cilantro in several parts of the United States. It’s also called “Chinese Parsley” in the United States and Asia.

Healthy Benefits
Coriander seeds have a health-supporting reputation that is high on the list of healing spices. In parts of Europe, coriander has traditionally been referred to as an “anti-diabetic” plant. In parts of India, it has traditionally been used for its anti-inflammatory properties. In the United States, coriander has recently been studied for its cholesterol-lowering effects.