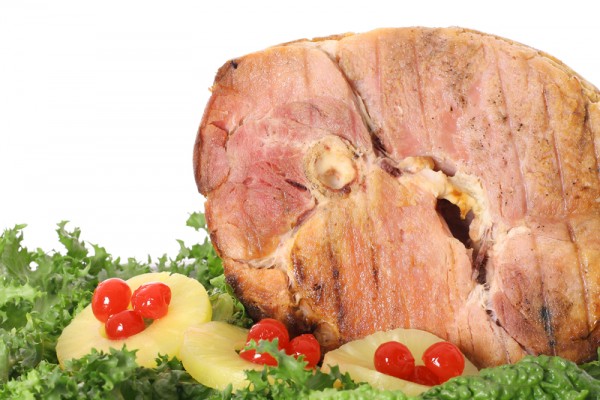 I love the flavor of a honey baked ham. It’s usually basted in fruit juices and then glazed with a mixture of brown sugar and honey. To make my version skinnier, I started with a precooked, spiral cut ham from Trader Joe’s. Happily, it’s uncured which means nitrate-free! In addition, I’m using much less honey and brown sugar for the glaze than a typical honey baked ham. Although mine’s not nearly as heavily glazed, it still taste delicious! Each serving has 238 calories, 5 grams of fat and 6 Weight Watchers SmartPoints.

3. In a small bowl, mix together pineapple juice and orange juice. Spoon 2 tablespoons over ham.  Bake ham for 5 minutes. Remove from oven drizzle 2 more tablespoons all over ham. Bake for an additional 5 minutes and spoon the remaining juices over the ham. Remove ham from oven.

4. In a small bowl, mix together brown sugar, honey and 1 tablespoon of orange juice.
Spoon mixture all over outside of ham. Place ham back in oven and bake, uncovered, for 45 minutes.

Food Facts
Many ham lovers say bone-in hams have a better texture and a superior taste. Just like chicken, a bone-in ham has more flavor because the bone itself imparts flavor into the meat.

With spiral cut hams, the slicing is done on a special cutting machine that spins the ham around while cutting thin slices through to the bone in a continuous spiral.

Shopping Tip
If you have a Trader Joe’s in your area, I highly recommend buying their ham. It’s uncured which means nitrate-free! Although they come with a glaze packet, I’m including my own recipe above. If you want to buy a larger ham, you’ll need to increase the amount of glaze in my recipe.
If you don’t have a Trader Joe’s in your area, most health food stores sell uncured hams. Or, most supermarkets sell bone-in spiral cut hams (precooked)