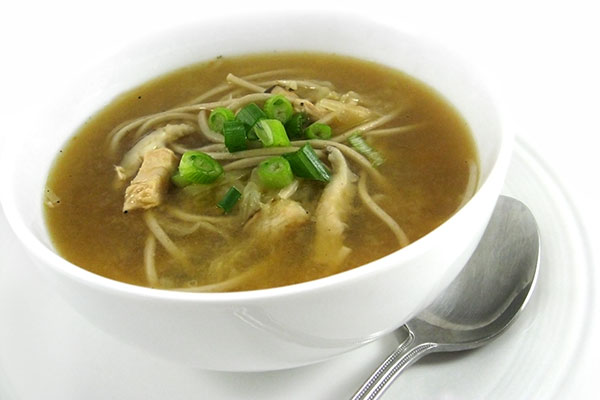 Now is the perfect time to satisfy your soul with a piping hot bowl of chicken broth-based soup. This delightful Asian-style soup is a “must try.” It has the most amazing, rich-tasting broth, that’s really addictive. My family loved it so much I actually made it a few times in the same week!  You might even want to double the recipe and freeze some. With the addition of chicken and noodles, it becomes a satisfying main course. Each main course bowl has 221 calories and 3 grams of fat. Gather all the ingredients and prep everything first, then this soup will come together very quickly.
Prep Time 15 minutes
Cook Time 15 minutes
Total Time 30 minutes
Servings 4
Calories 221kcal
Print

Makes 4 main-course servings
Food Facts
Chicken soup is so popular and its appeal is universal all year round.  Even in warm climates such as Mexico, India, and parts of Asia, people eat steaming chicken soup. Hot and Sour Soup can refer to soups from several Asian culinary traditions.  In all cases, the soup contains ingredients to make it both slightly spicy and sour. Shiitake mushrooms are originally from Japan and Korea.  They are now being cultivated in the United States, where they’re often called golden oak.
Healthy Benefits
Calorie control is just one benefit of including more soups in your diet.  Soup may have an added health benefit, too: Studies show that soup produces greater feelings of satiety than other types of food. Researchers speculate that it may have to do with the high water content. Also, when the soup is piping hot we eat it more slowly and that gives us time to notice when we feel full. Even though I’m using Swanson’s reduced-sodium chicken broth, this soup is still high in sodium.  If you are on a low sodium diet, choose a chicken broth that’s much lower in sodium than Swanson’s.
Shopping Tips
Fresh shiitake mushrooms can be found in most supermarkets. I bought it at Trader Joe’s.  If you can’t find them use another type that you like. Most supermarkets sell Japanese Soba noodles. They can be found in the Asian section or use whole wheat spaghetti for this recipe. Chopped or crushed ginger, in a jar, can be found in the produce section near garlic, in a jar.
Serving Tips
My recipe for Low Carb Chicken Lettuce Wraps…Just like In Your Favorite Asian Restaurant or Panda Express Egg Rolls Made Skinny would be great to serve alongside this soup.
WW Freestyle SmartPoints 2-Blue
WW SmartPoints 5-Green
WW POINTS PLUS 5