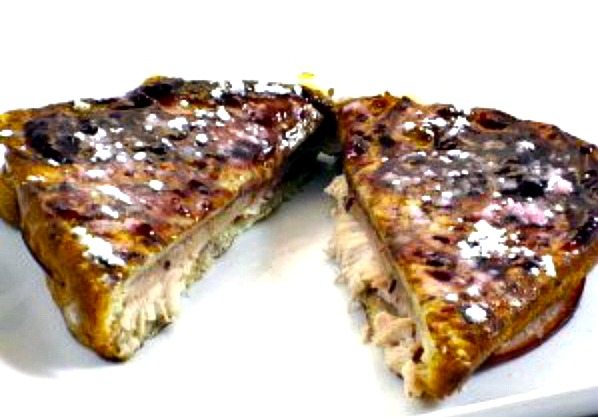 Ahhh, the Monte Cristo. How wonderful to serve this dish for breakfast or brunch on the weekends.  This extravagant jewel is traditionally made with 2 slices of white bread, ham, turkey and a slice of cheese. It’s dipped in eggs and fried in gobs of butter. Finally, topped with jam and powdered sugar. One big problem - it has a ton of fat and calories. In fact, this deliciously decadent sandwich normally has 1122 calories and 69 grams of fat! This skinnier version has the same great taste but contains 470 calories and 8 grams of fat.  If you’re looking to cut the calories and fat, half of the sandwich is still very satisfying.
Prep Time 10 minutes
Cook Time 6 minutes
Total Time 16 minutes
Servings 2
Calories 470kcal
Print

Makes 2 sandwiches. It’s so satisfying, it can serve 4, each with ½ sandwich.
Food Facts
Some food historians think the Monte Cristo is a variation of a French sandwich called Croque Monsieur, which is basically a grilled ham and cheese.  Although there are no documents to verify it, many feel the Monte Cristo was first served in Southern California in the 1950s.  Disneyland in Anaheim, California also contributed to the trend of eating the Monte Cristo.  It first appeared in 1966 on the menu of their Blue Bayou and Tahitian terrace restaurants in the New Orleans Square. They still serve it today.
Shopping Tips
My favorite bread is Milton’s multi-grain bread. Most supermarkets sell it along with Trader Joe’s and Costco. Look for turkey breast and ham that’s uncured with no nitrites. It’s so much healthier. Most supermarkets sell these along with Trader Joe’s and Whole Foods.
Prep Tip
To prepare several sandwiches- preheat oven to 300 degrees.  Cook 2-4 sandwiches at a time depending on your pan size.  Place the grilled sandwiches on a baking sheet and keep warm in the oven while the rest are being cooked.
WW Freestyle SmartPoints 13-Blue
WW SmartPoints 14-Green
WW POINTS PLUS 11