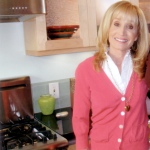 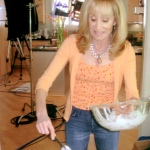 Nancy Fox is no stranger to the food industry. Fresh out of college she founded Mrs. Beasley’s, the now-famous gift-basket company featuring gift baskets full of decadent baked goods. They ultimately became the “gift to give” in the Hollywood entertainment community.  (It is often mentioned on HBO’s hit series, Entourage.)  Its reputation grew based on incredible-tasting mini-muffins such as chocolate, pistachio, lemon, and poppy seed. During the Holiday seasons, thousands of Mrs. Beasley’s gift baskets were ordered by a celebrity clientele that included the likes of Barbra Streisand, Jay Leno, Jody Foster, Tom Hanks, Goldie Hawn, Meg Ryan, Rosie O’Donnell, Joan Rivers, Suzanne Somers, Cher, Hugh Hefner, the LA Lakers, the LA Kings, Magic Johnson, Shaquille O’Neal, Bette Midler, Rob Lowe, Dustin Hoffman, Neil Diamond, as well as all of the major studios, including Paramount, Disney, and Universal.

Nancy was also the creative force behind Nancy’s Healthy Kitchen, a tremendously successful restaurant concept, opening her first location in Encino in 1994 to immediate rave reviews from critics and the public.  The menu featured old-fashioned “comfort foods” modified into reduced-fat versions that tasted more decadent and every bit as good as the original high-fat versions.

Nancy’s was named the “Best Health Food Restaurant” by Los Angeles magazine and featured in numerous national magazines such as Shape, In Style, Travel and Leisure, Bon Appétit, Self, and Men’s Fitness, to name a few.  “Nancy’s” was also introduced to television audiences on the L.A. morning news shows of KNBC, KCBS, and KTTV as setting a new direction in restaurant dining.

Nancy has generated a great deal of television interest in her concepts of eating.  She demonstrated her reduced-fat cooking when she hosted the “Fitting it in” show on Fox Sports Net 2.  She made several appearances on NBC’s “Later Today,” the Food Network’s “Chef du Jour,” HGTV’s “Smart Solutions,” “Home and Family” and “Party at Home” shows, CBS’s “Terry Bradshaw” show, and ESPN’s “Getting Fit with Denise Austin,” for which she received over 10,000 letters from viewers requesting recipes.

Nancy was a guest speaker twice at the California Governor’s Conference for Women, where 7,500 of the most prominent women in California gathered to consider Women’s issues, along with dozens of live cooking demonstrations in the Los Angeles area at upscale cooking schools, hospitals, and department stores.  She has also authored two books on reduced-fat cooking, the first, Nancy’s Healthy Kitchen Baking Book, was published by MacMillan & Co., and her later Nancy’s Healthy Kitchen Reduced-Fat Salad Dressings.

Continuing her passion for cooking and baking, Nancy created a recipe website called Skinny Kitchen.com. Skinny Kitchen is your fun guide to healthy yet decadent-tasting recipes. You’ll be delighted with the array of hearty comfort food recipes, we all love, but with a twist, they are SKINNYFIED™! Whether you’re simply looking to cook healthier or you’re following WW, Gluten-Free, Paleo, Dairy-Free, and such, Nancy’s got you covered. All recipes include nutrition facts. Each week she shares her skinny recipes, cooking and kitchen tips, food finds, and the healthy benefits of many recipes.

Nancy has two sons and she resides in San Luis Obispo, CA. with her husband, psychologist Dr. Allen Fox.