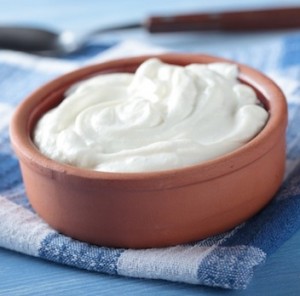 New research suggest that yogurt is a food to eat to lose weight.

A new study published in the Nutrition, Metabolism and Cardiovascular Diseases, from the University of Navarra in Spain followed more than 8,500 adults and found that those who eat 7 or more servings of yogurt per week of yogurt (including full fat) were 20 percent less likely to become overweight and 38% less likely to become obese during the six-year study, compared to those eating fewer than two servings of yogurt per week. This study also noted yogurt eaters followed a more Mediterranean style diet and generally ate yogurt as dessert. Those who ate the most yogurt and fruit were the least likely to gain weight.

How to Buy a Better Yogurt

There are literally hundreds of choices in the yogurt aisle these days, including regular, fruit-flavored, artificially-sweetened, Greek, Swiss, Icelandic and oodles of other options. Use this guide to help you find the best choices.

Nutrient facts among yogurts are often close in calories, protein and fat but sugar content varies greatly and you need to look at it when buying yogurt.  Plain Greek yogurt, (my choice) in any brand is definitely highest in protein, lowest in fat, and lowest in sugar. However, many new varieties of flavored Greek yogurt have lots of added sugars, so be sure to check the sugar counts on what you’re buying.

Always look at the protein and sugar content of yogurts and buy those with the most protein and least amount of sugars.

***This informative article and chart were written by Julie Upton, MS, RD, CSSD at Appetite for Health.