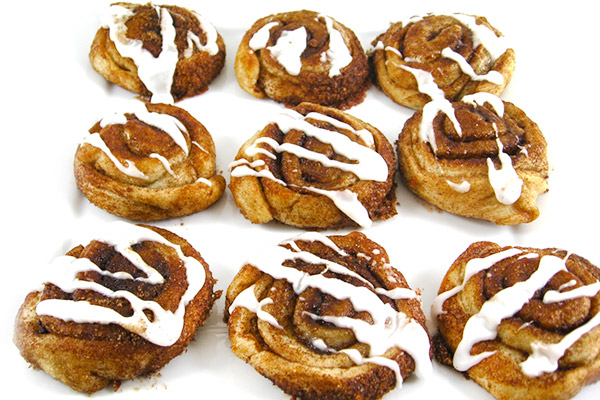 I have one word to describe this delectable little treat, delicious!!! What a great treat, snack, breakfast, or dessert. You’ll love how easy they are to make. The only hard part is limiting yourself to eating just a few!  Each has 90 calories, 1 gram of fat and 3 WW Blue Freestyle SmartPoints, and 3 Green.

1. Preheat oven to 425 degrees. Line a baking sheet with parchment paper or coat with cooking spray.

2. Open the can of pizza dough and stretch out flat onto lined baking sheet. With a pastry brush, spread ½ of the butter (¾ tablespoon) all over dough. If you don’t have a brush, drizzle ¾ tablespoon all over dough and spread with a dull knife or back of spoon.

3. Combine sugar and cinnamon in a small bowl, until well blended.  Sprinkle 2 tablespoons of this mixture over the top of pizza dough, covering the butter.  Starting at the shorter side, roll up the pizza dough so that the sugar mixture side is now inside the rolled dough.  Spread remaining butter over the top and sides of the rolled dough. In addition, sprinkle with 1½  tablespoons cinnamon/sugar mixture all over the top and sides of the dough.

5. Place each piece on the baking sheet and leave room between each for spreading. You might need to re-roll each piece to tighten up the rolls and tuck in the end of each roll to it keep it together. Sprinkle the remaining cinnamon/sugar mixture over the top of each sliced cinnamon roll.

6. Bake in oven for about 12-13 minutes until completely baked. Remove from oven and let cool.

7. To make glaze: In a small bowl, mix together the powdered sugar and enough milk for a thick glaze consistency. Drizzle a little glaze over the cooled rolls.

8. These will keep wrapped on the countertop for a few days. When ready to serve, heat for about 10 seconds in the microwave. They also freeze great.

Food Facts
The first cinnamon roll was baked in Sweden, where Oct. 4 is known as National Cinnamon Bun Day. Cinnamon rolls are known in Sweden as “kanelbulle.” This word literally means cinnamon bun.

Cinnamon rolls are a popular breakfast food in the United States. Philadelphia-style cinnamon rolls date back to the 18th century. These contain honey, sugar, cinnamon, and raisins. They are often associated with Philadelphia and a coffee shop counter lined with sticky buns is still common in this city.

Shopping Tips
Pillsbury refrigerated pizza dough can be found in most supermarkets in the refrigerated case where other types of packaged dough are sold.