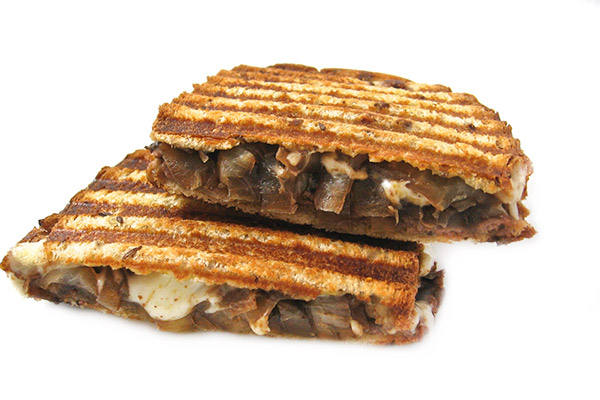 Roast Beef and cheese is a classic pairing but when topped with caramelized onions and grilled, it soars into extraordinary!!! I created this amazing sandwich originally for St. Patrick’s Day, that’s why I’m cooking the onions in Guinness (beer) but you’ll love it all year round. Each hearty sandwich has 394 calories and 10 grams of fat.  If you’re on WW, ½ sandwich will be very satisfying. It’s so filling and perfect for dinner. Serve with a side salad and that’s all you’ll need!
Prep Time 10 minutes
Cook Time 25 minutes
Total Time 35 minutes
Servings 2
Calories 394kcal
Print

Makes 2 grilled sandwiches
Food Facts
Guinness is a popular Irish dry stout that originated in the brewery of Arthur Guinness (1725–1803) at St. James’s Gate, Dublin. Despite its dark color and full flavor, Guinness has fewer calories than most average beers. In fact, at 125 calories for a 12-ounce glass, it has about 25 fewer calories than most ales or lagers. Budweiser by comparison has about 145 calories. Many people feel it’s far more satisfying than many of the lite beers on the market.
Shopping Tips
Trader Joe’s sells packages of roast beef, uncured, without nitrates. It’s available in 8 oz packages. Or, have the deli section of the supermarket thinly slice the roast beef. The brand of bread I used is Oroweat Rye. It’s only 70 calories a slice. Most supermarkets sell this brand of rye. Most supermarkets sell Sargento reduced-fat Swiss cheese. Each slice has 60 calories and 4 grams of fat. There are several other brands available along with reduced-fat Jarlsberg, Provolone or Mozzarella. Most supermarkets and Trader Joe’s sell Guinness. You’ll also find it in most liquor stores. If you can’t find it use regular beer or even light beer.
WW Freestyle SmartPoints 11-Blue
WW SmartPoints 11-Green
WW POINTS PLUS 9