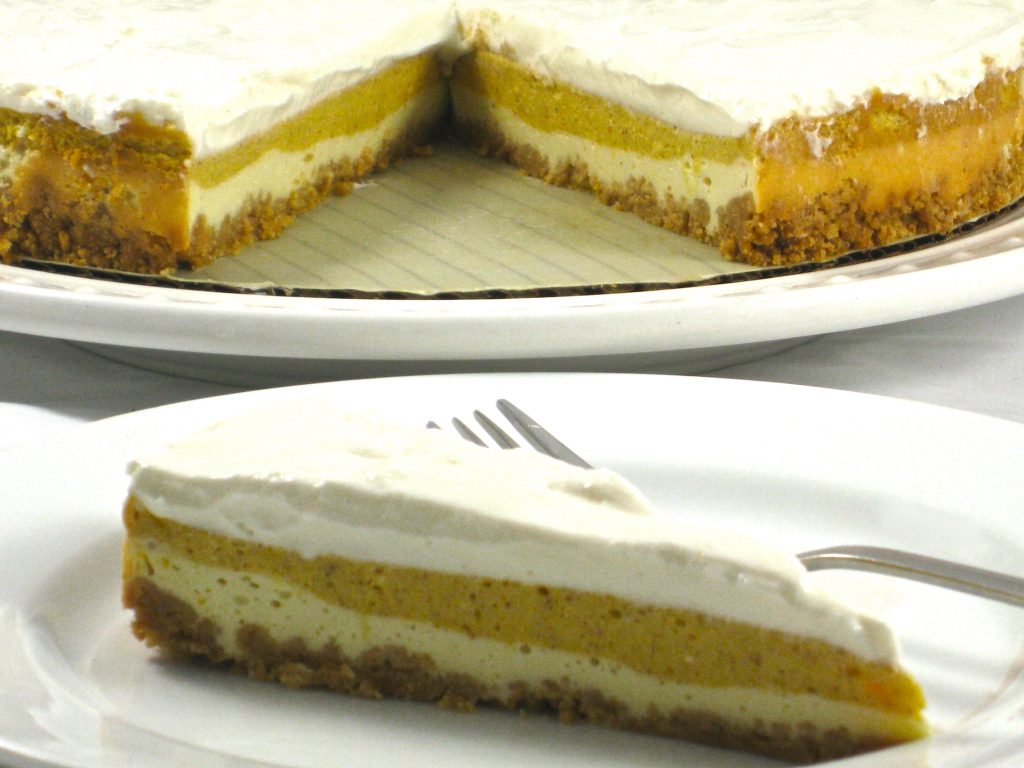 Tired of the same old pumpkin pie year and year?  Why not “wow” your guests with this stellar dessert.  It’s pleasing to the eye as well as the palate.  Adding pumpkin to this cheesecake makes it light and smooth.  One bite of this creamy creation and you’ll be smitten.  Good news too-one skinny slice has 232 calories, 9 grams of fat and 6 Weight Watchers POINTS PLUS.  A fattening slice of Cheesecake Factory’s Pumpkin Cheesecake will set you back 570 calories and 32 grams of fat. That’s over twice the calories and 4 times the fat.Gulp!

1. Preheat the oven to 350 degrees.  Coat a 9-inch spring-form pan with cooking spray.

2. To make the crust: In a medium bowl, combine graham cracker crumbs and melted butter. Press into the bottom of the prepared pan.  Set aside.

3. To make filling: Using an electric mixer or a hand mixer in a large bowl, beat the cream cheeses until fluffy and smooth.  Add the sugar, vanilla, and mix until smooth.  Add the eggs and mix well.  Separate one cup of batter from the rest and set aside. Pour the remaining batter on top of the crust.  Add the set aside 1 cup of batter back to the mixing bowl.  Stir in the pumpkin, cinnamon, and pumpkin pie spice and mix well.  Pour the pumpkin batter on top of the cream cheese batter.  Spread evenly.

4. Bake for about 30-35 minutes until set.  The middle will still be wiggly.  It will firm when cooled.

6. To make the topping: Turn oven temperature up to 475 degrees.  In a medium bowl mix together the sour cream, sugar and vanilla until combined.  Gently spoon the topping over the cooled cheesecake.  Bake for 5 minutes.

7. Cool, cover and refrigerate for at least 6 hours or overnight before serving.

Healthy Benefit
If you prefer to use reduced-fat sour cream instead of fat-free for the topping it will tastes even richer.  The Skinny Facts were based on fat- free sour cream.  Reduced-fat adds 34 calories and 4 grams of fat per slice.

Prep Tips
To avoid lumps in your cheesecake batter, the cream cheese should be at room temperature before you start mixing.  Beat the cream cheese by itself until its light and smooth before adding the other ingredients.

Don’t throw the left-over canned pumpkin away. Store in the fridge and later try my recipe for Jamba Juice’s Pumpkin Smash Smoothie is Back and So is My Home Version. It’s yummy…

Bake Tip
Once a cheesecake is fully baked, it should still look moist and wiggly in the center and firm on the sides.  It will firm up as it cools.

Serving Tip
To cut cheesecake easily, use a hot sharp knife.  To keep the knife hot, fill a tall glass with hot water, deep enough to cover the blade.  After each cut, dip the blade into the hot water and wipe dry before making the next cut.