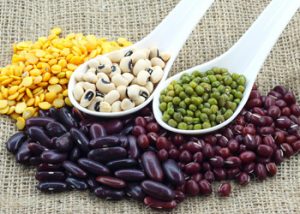 8 Foods to Fill You Up, Not Out. One of the hardest things about losing weight is cutting calories without feeling hungry. To shed pounds successfully – and keep them off – it’s important to fill your belly in ways that will keep it satisfied and full. If you simply cut portions without including more “feel full” foods, you’re likely to experience hunger and eventually eat more. Instead, get smart about adding high satiety foods to your diet when you cut portions. Include the high-protein, high-fiber, and high “water volume” foods that make our Great 8 Filling Foods List.

Start your meal with a soup! Dr. Barbara Rolls, Professor of Nutritional Sciences at Penn State University has been a pioneer in studying the role of “high water volume” foods on fullness and weight loss. One of her key findings: broth-based soups can contribute to a feeling of fullness. Broth-based soups like miso or chicken noodle are most effective while heavy, cream-based soups such as New England clam chowder defeat the purpose. And keep in mind that soup isn’t only a cold-weather food. In the summer, try chilled gazpacho or cucumber soup. Broth-based soups are the perfect appetizer and can keep you from overindulging in the main course and dessert.

Lentils and chickpeas are nutritious, tasty and filling high-fiber foods that can be included in a number of different types of entrees and healthy snacks. Since beans can add up to a lot of calories if you eat more than a serving or two, it’s a good idea to combine them with vegetables that are low in calories and will also help to keep you feeling full longer. Beans and legumes also have a great added perk! They are inexpensive.

Want a filling breakfast that will give you energy? Eat your oats! Researchers at the University of California, Berkeley analyzed a national six-year survey and found that people who ate breakfast had a lower body mass index (BMI) than people who skipped breakfast, and that those who ate cooked cereal had a lower BMI than any other breakfast-eating group. Also, oatmeal was ranked as the most satiating breakfast food on the Satiety Index, developed by Australian researchers a decade ago, and it’s the third most satiating food overall. Avoid oatmeal with added sugar and boost the flavor and ‘fullness power’ of your oatmeal by adding in some sliced apples, berries or raisins.

One of the biggest nutrition myths going is that you have to avoid nuts to lose weight. The truth is, nuts have been shown in multiple studies to help people shed pounds.

Although nuts are calorie-dense and high in fat (mostly healthy fat), their protein content can keep you feeling full and often stave off a binge later in the day.

Best way to have nuts? Try them with a glass of water. The volume that water adds to the stomach combined with the slow-to-digest nuts make a perfect quickie fill-up. Being hydrated can help with hunger management and nuts provide due of protein and fiber which is one of the best combos to tied you over.

Speaking of water…. I know… it’s not a food. But water is worth including on our list. Have you heard the weight loss tip about drinking one glass of water before meals? It’s been around for decades, but only recently has a well-designed research study shed some scientific light on this topic. It turns out that this may be one diet trick worth trying.

Virginia Tech researcher Brenda Davy and her team studied 48 adults between the ages of 55 and 75. All study participants ate a low-calorie diet for 12 weeks. Half of the group drank 16 ounces of water before meals. The other half did not. At the end of the 12 weeks, the water drinkers lost an average of 15.5 pounds, while the ones who did not have water before meals lost about 11 pounds. And unlike many fad diets, the weight loss seemed to last. After a full year of the same regimen, the water drinkers had slimmed down by an additional 1.5 pounds, on average, while those who didn’t load up on water before meals gained about 2 pounds. Most likely the weight loss occurred because water is filling without adding calories. In some cases it could also be displacing calorie-containing drinks. Either way… drinking water prior to meals could be an easy way to help keep you from overeating.

When you cut calories, protein can help keep you feeling full and control hunger. Chicken, especially when prepared lightly (baked, grilled, broiled) is a great source of protein. Fish, lean meat, tofu, and other proteins (like beans, legumes, and eggs on this list) are also terrific. But chicken makes my list because it is relatively inexpensive, versatile and easy to incorporate into meals. Plus you find it just about everywhere when you’re on the go.

Fruits & Veggies… probably one of the best lose-weight weapons in your arsenal. High in fiber and water, they’ll fill you up without blowing your calorie budget. Aim for nine or more servings of fruits and vegetables every day. You can incorporate them into your diet in many ways: bulk up recipes or simply include more servings of whole fruits and vegetables at meals or snacks.

The high-quality protein in eggs helps you to feel full longer and stay energized, which contributes to maintaining a healthy weight. In one study published in the Journal of the American College of Nutrition, researchers found that eggs for breakfast helped overweight adults feel fuller and consume an average of 330 fewer calories throughout the day than adults who ate a bagel-based breakfast with the same number. For a perfect meal anytime of day, try this delicious Veggie Omelet.