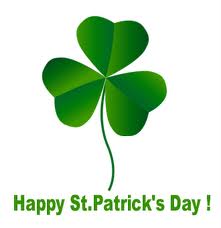 St. Patrick’s Day is an Irish holiday celebrated all around the world to honor the patron saint of Ireland, Saint Patrick.   The Irish have observed this day as a religious holiday for over a thousand years.  On this day, Irish families would attend church in the morning and celebrate in the afternoon.  It began as a purely Christian holiday and became an official feast day in the early 1600’s.  It gradually became a more secular celebration of Ireland’s culture.  The first year St Patrick’s Day was celebrated in America was in Boston in 1737.  The first official St. Patrick’s Day parade was held in New York City in 1766.  Now over 100 U.S. cities hold parades.  Celebrate with this delicious skinny meal- Skinny Guinness Irish Pub Beef Stew For St. Patrick’s Day and a Fabulously Healthy, Edamame, Spinach and Garlic Hummus. Bright green, of course!  For dessert, Mc Donald’s Shamrock Shake Made Skinny and Fat-Free. Whether you’re Irish or not, it’s always fun to indulge in the festivities on March 17.  And so the saying goes, “On this day, everybody is Irish.”

The luck of the Irish to ya!